By BDA AuroraSeptember 17, 2021No Comments 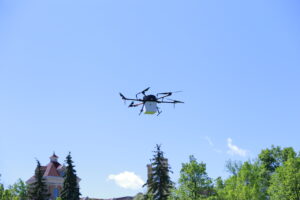 The AAT-1200 Thunderbolt carrying a package

While patiently waiting for my canned noodles to heat up in the microwave, I start thinking – how the heck did this get started? Who had the brilliant mindset to figure out the invention of the microwave?  Many items that we take for granted in our lives today first had military applications: computers, blood transfusions, duct tape, T-shirts, silly putty, aerosol bug spray, the internet, sanitary napkins, and so much more.  Yes, also canned food and microwaves (albeit for different purposes at the time).  Any time new technology enters the realm of the armed forces, the rules of the past no longer apply: tactical, efficiency, defense and fortification, you name it, the new technology in these realms change the face of combat and impact how the battle is won.  There has always been a strong relationship between military tech and the tactics and psychological factors that went into how the technology was used.  From the invention of the mace and cannons, to helmets and body armor, one can easily see the advantages of employing new technology in the past.  For example, the first ever recorded use of a firearm was in 1364, entirely changing the battlefield’s former weapons of choice – bows and arrows, and swords.  It has only been in the last century where we have seen the advent of digital technologies and their impact on society.  Sonar, for example,  was invented for ships to avoid catastrophic underwater obstacles and to detect submarines.  Digital cameras started as a tool on spy satellites during the Cold War.  Today’s cutting edge disruptive military technology would be the drone. 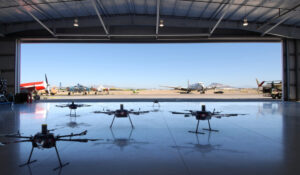 Uncrewed Aerial Vehicles (UAVs) have actually been around for much longer than most of us would think.  The first aircraft without a human pilot took flight in 1783, with the first public demonstration of an uncrewed hot air balloon in France.  The man who opened the door to UAVs as we know it today and made it all possible – Nicola Tesla, who demonstrated the radio control he invented in New York City in 1898.  The first pilotless winged aircraft in history was the radio-controlled Ruston Proctor Aerial Target, whose purpose was to act as a flying bomb.  The first functioning UAV was developed in 1918 by Orville Wright and Charles Kettering.  They developed a “self-flying aerial torpedo” that became known as the Kettering Bug.  Following breakthroughs transistor technology and consumer hand-held transmitter production, the 1960s saw the beginning of civilian drones – RC flying model airplanes (although the first consumer-grade plane was built in 1938 by the Good brothers, called the Big Guff). Drones were used for spying and surveying by militaries around the world for years after the Second World War, but seemed fairly quiet until after the devastating 9/11 attack on New York City, which prompted the war on Terrorism and the use of CIA drone-based kill operations using the Predator.  Since then, there have been more and more drones used around the world in both military and civilian life.

Today, drones are entering the next phase of technological achievements through the development of swarms.  Militaries around the world have taken notice of the benefit of swarm capabilities, most notably in the safety that they can offer to the operators in the field, as well as the efficiency, among other benefits.  The most common uses seem to include kamikaze drones, drones with longer ranges that can either spy or survey large areas without detection, pick up or drop off military supplies and first aid, and anti-drone defence systems.  Armed forces around the world have been pushing publicized showcases of their extensive research, particularly over the last few years.  Some of these countries include: India – Earlier this year, India did a demonstration showcasing their military kamikaze and bomb-dropping drones, which flew out of a larger mothership drone.  You can watch their military propaganda film here, filmed during their Army Day Parade in March.

Turkey – According to the United Nations, in Libya last year, Turkey allegedly launched their lethal Kargu-2 drones in a swarm attack against the Libyan general and warlord Khalifa Haftar’s militias.  This would have been the first time an autonomous AI drone swarm successfully accomplished a military attack, although the Turkish state-owned defence company denies these autonomous attack capabilities.

Azerbaijan and Armenian War – Although this war looked as though the Armenians may initially win, once Azerbaijan acquired Turkish drones and training, old military tactics no longer applied.  The tables turned, Armenia surrendered, and Azerbaijan ultimately came out victorious.

Russia – Long-invested in drone concepts, Russia has been working on the development of swarms.  The planned swarm, Flock-93, is expected to have vertical takeoff and landing (VTOL) capabilities, making them versatile in where they can take off and land.  Russia also hosts armed forces gatherings of various countries in the East, including China, India, Armenia, Iran, and more – the last gathering taking place in the Kavkaz region in 2020.

The still-ongoing war in Eastern Ukraine and Crimea is also amping up its drone usage.  Russia has allegedly been using drones for years, such as in Crimea, where Ukraine has started to develop and acquire them only more recently.

Israel – In May this year, during an 11-day conflict with Gaza, Israelis launched a drone swarm offensive attack they claim as the first of its kind in the world (although that is debated), where they autonomously hunted, identified, and attacked Hamas militants.

UK – The United Kingdom’s Ministry of Defense claims to have swarms of armed drones ready for use this year, and have tested the hybrid forces in 20-drone swarm trials named the Autonomous Advance Force 4.0.

China – Last year, China released a video of suicide (kamikaze) drones being launched from the back of a truck, and is being recognized as a competitor with American-made military drones. 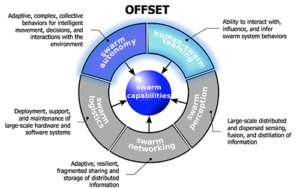 USA – The Defence Advanced Research Projects Agency (DARPA) has launched the OFFensive Swarm-Enabled Tactics (OFFSET) program that would develop autonomous swarm capabilities in drones.  The plan is to support hybrid-style military by giving future small-unit infantry forces swarms of up to 250 UAVs by exploring what the relationship between humans and AI could mean.  Like China, in 2015, the States developed a drone swarm that can be shot into the sky.  The US Navy’s Low-Cost UAV Swarming Technology, or LOCUST, fires swarms of up to 31 drones in 40 seconds, and has recently destroyed a surface vessel target for the first time this year during the Unmanned Systems Integrated Battle Problem exercise.  The US Army is also developing groundbreaking charging ports for drones within the battlefield.

Anti-Swarm Tech – Of course, the advent of the drone technological arms race has given rise to interests in anti-swarm technology worldwide.  The American military has been working toward developing, and arguably leads in anti-swarm tech.  Their least-expensive success was the Mobile Force Protection (MFP) system, which, according to Drone DJ, hocks “a big loogie of plastic pink stuff that looks suspiciously like Silly String at targeted craft”.   A slightly more expensive, and perhaps effective, system is the Tactical High Power Operational Responder (THOR), which can stop hostile drone swarms at long range by using electromagnetic waves that stop the swarm in its tracks.  Currently, the USA’s military is working toward an even more beefed up version, Mjolnir, which will build on THOR in advances in features such as capability and reliability.

If the military is so far ahead of the game with swarm technology, I wonder how long until we take it for granted in the civilian world? At Aurora Aerial, we have already proven our technology to have swarm capabilities by flying multiple drones on one GCS.  Currently, the Canadian regulation limits us to 5 at once.  That means that whatever mission these drones are programmed to do, it can get done FIVE TIMES more efficiently.  If it would have taken an hour before, now it takes a brief twelve minutes.  The possibilities for swarm technology are infinite and we are only just scratching the surface.  We can’t wait to see how this will change the world in the next 5 years.